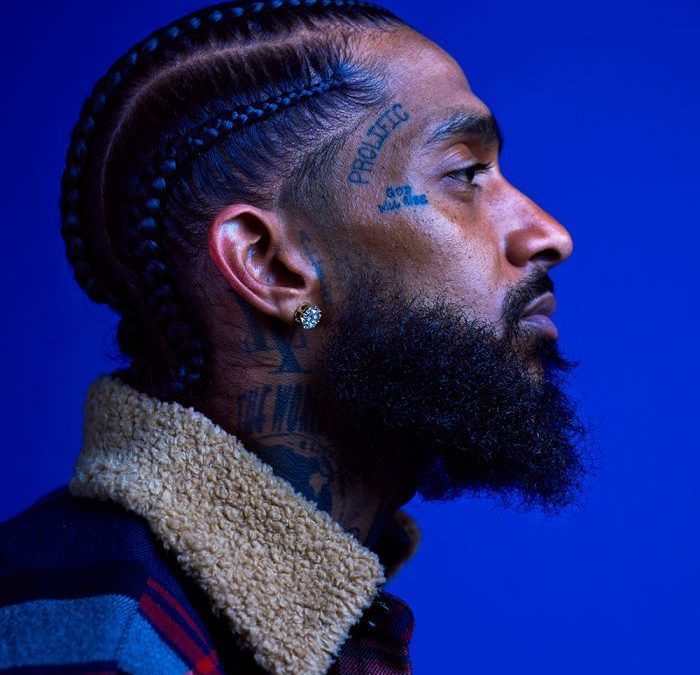 Two weeks ago, a man who shall remain nameless gunned down another man who was undoubtedly famous. The gunman fired six merciless shots at rapper, philanthropist, and businessman Ermias Asghedom, a.k.a. Nipsey Hussle.

I gasped when I read the headline on The Shade Room’s Instagram account that the man many simply called “Hussle” had been shot outside of his store, The Marathon Clothing, about 3:30 p.m. PST.  My hope was that this would be more like Tupac Shakur’s first shooting incident where, afterwards, he flashed the middle finger at paparazzi while being lifted into an ambulance. I thought Nipsey would “pull through,” a comment I saw from people online who wanted to see him recover.

Unfortunately, he and Tupac now shared a similar, violent ending.

Prince once sang that “sometimes, it snows in April.” Nipsey’s murder on March 31, 2019, felt much like that: out of place, hard to believe, and undoubtedly cold.

For the record, all I knew about Nipsey prior to his death was that he was a popular rapper, businessman, father, and the longtime love of actress Lauren London. He seemed impenetrable in his photos, an almost untouchable figure that many loved and no one bothered to disrespect. For so many recording artists, especially those in the hip-hop industry, that combination was the dream.

For his loved ones, however, the last two weeks have likely been a nightmare.

While word of his death dominated entertainment web sites and news reports, testimonials from individuals he helped began flooding social media. One after the other, people came forth to tell stories about how much Nipsey invested in his beloved Crenshaw community, how he worked hard to build his music career from the ground up, and that he never lost sight of his identity despite rising fame and revenues.

Throughout all the coverage, however, there’s been backlash against those who feel affected  but hardly knew his music. Some die-hard fans of Nipsey and critical bystanders alike have the same question: if you didn’t even know him before, how are you going to grieve now?

Here’s my answer: we did know Nipsey.

We, the people who knew little about his music, enjoyed seeing him and Lauren together. We didn’t hear constant reports of fights with his oldest child’s mother or screenshots of text arguments every time he and some other rapper were at odds. We just knew stories of his life without knowing all about his life in an age when less is too little, and he was familiarly touchable while being just out of reach.

We, the people from communities like or even halfway similar to his, grew up with boys like Ermias. They were intelligent but without many options, loved in areas where violence was a daily threat, and resourceful but sometimes in illegal ways. There were no “fixers” or wealthy parents to erase their wrongdoings, and some of them went to prison for up to twenty years of our lives. Others died on the road to their redemption, and some tears over this tragedy have triggered memories of our fallen loved ones.

We hate the idea of more children growing up without their father.
We’re sick of hearing that, yet again, an advocate for advancement was permanently stopped.
We don’t want R.I.P. hashtags, slow-motion memorial videos, and tributes in honor of yet another soul who actually meant good and was met with evil.

I don’t mention Nipsey’s killer by name because no matter who held the gun, we know what guided the shooter.

They represent the six shots fired into a man who stood for so much more than his own music sales. Nipsey was about the recognition, uplifting, and advancement of his community while maintaining its authenticity. “Neighborhood Nip” wasn’t just a moniker; it felt more like a directional mantra as he teamed up with his investing partner, Dave Gross, to buy the West Slauson plaza where The Marathon Clothing store stands and turn it into a multi-use development with 100 units.

He was both a member of the Rolling 60’s Crips, and an avid reader who often quoted motivational mantras and shared business facts.
Though he had been to jail and now sat in boardrooms for meetings, he didn’t turn his back on felons and employed them in his store upon their release.
He was once a hustler who made $250,000 that he hid in his mom’s backyard, but later had the rare experience of Jay-Z buying 100 copies of his $100 mixtape.

He was the success story and the struggle all at once, and too many people get stuck in the latter. Despite some of the earlier methods, his rise is one that many can appreciate.

So, for far more than his fame, we appreciate the faith he had in his craft.
We respect the people and the principles he lived by in his latter years.
For the child who built a computer by himself at the age of 12, we marvel at his talent.
For the man who preached continuity despite his celebrity status, we mourn his loss.

So, to any critics, yes, we did know Nipsey Hussle. It is my hope and prayer that the movement he started in Crenshaw continues there and in cities across the globe. There are “Nipseys” of all ages, ethnic groups, and backgrounds who work anonymously yet tirelessly, and they need our financial and physical support to keep multiple initiatives going. Please consider joining in where you can and work to be the change this world needs.

Rather than leave you with his lyrics, I’ll share two of Nipsey’s quotes as a reminder to continue running our own marathons:
” Stay focused, keep working hard, believe in yourself. Stay pure. Stay motivated, stay inspired. Show love to your people. The truth is in you…everything is there. So, when you zero in, all the details will come back to you.”